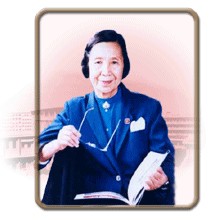 Hu Yamei, female, was born in Beijing on March 24, 1923. Of Han nationality, she is a member of the CPC. She graduated from the School of Medicine, Peking University, in July 1947. She worked as a resident and then attending at Beiping Private Children's Hospital from 1947 to 1952, served as attending and then deputy chief at Beijing Second Children's Hospital from 1952 to 1955, and was successively deputy chief, chief, and professor of pediatrics at the Internal Medicine Department of Beijing Children's Hospital and Dean of the Pediatrics Department at Capital Medical College from 1955 to 1989. She has been honorary dean after that. She has also served as Vice President, President and Honorary President of Beijing Children's Hospital since 1980, and was elected academician of Chinese Academy of Engineering in 1994.

Professor Hu Yamei has accumulated rich experience in medical services, teaching, research, and disease prevention over the years. In the late 1970s, she led the BCH hematology team to conquer blood cancer (leukemia) which was a severe threat to children's health in China. Up to now, she has treated over 1,000 patients and the leukemia-free survival rate for over five years is up to 74.4% which is up to international standard and has attracted attention from both home and abroad. In more recent years, besides leukemia research, she has also worked for the special committee of national fund for leukemia in children, with a view to establishing a national children's leukemia treatment and research center and benefiting more patients in China. In addition, Professor Hu has also made achievements in regard to pulmonary Langerhans' cell histiocytosis, thrombocytopenic purpura, nutrition deficiency in children, and infantile diarrhea. She assisted Professor Zhu Futang in compiling Practical Pediatrics, which has been revised for seven times up to now. Over the past years, she compiled Practical Clinical Handbook of Pediatrics and Encyclopedia of Infant and Child Health. In her 50-year career, she has published a number of papers and her research on blood diseases and other topics has won first, second and third prizes from Beijing Municipal Science & Technology Commission, second prize for science and technology achievements from Beijing Municipal Health Bureau, and third prize for health science from the Academy of Military Medical Sciences. She has paid a number of visits to the United States, Japan, Britain, France, Canada, Belgium, Sweden, India, Thailand, and the Philippines for academic exchange and actively publicized the great achievements China has made in the health sector and pediatrics, improving people's understanding of China and promoting communication in the healthcare sector.