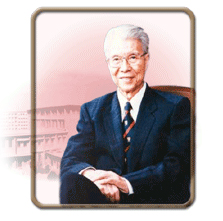 Zhang Jinzhe, male, of Han nationality, is a CPC member and a senior expert in pediatric surgery. He was born on September 25, 1920, in Ninghe County, Tianjin. He graduated from Shanghai Medical College in 1946. He came to work at the new Beijing Children's Hospital in June 1955 and served successively as head of the Surgery Department and Vice President of the hospital and professor of pediatric surgery at Capital Medical College. He is still working on the front line today, serving as senior chief of pediatric surgery and doctoral professor.

In 1950, he launched the first pediatric surgery department in China at Peking University Hospital and became the most widely reputed founder of the discipline. He started his extremely fruitful career at the new Beijing Children's Hospital in 1955, building the Pediatric Surgery Center from scratch and making it the largest in China. Meanwhile, he has also made great contribution to medical practice, research, innovation, education, the development of pediatric surgery society and relevant academic journals, and domestic and international exchange and cooperation in relevant fields. In more than 50 years, he has operated on over 10,000 patients, made more than 50 inventions, published over 150 papers, compiled and co-compiled over 30 books, won more than 10 awards for science and technology progress at the provincial and ministerial level, cultivated hundreds of pediatric surgeons, and trained nearly 20 postgraduate, doctoral, and postdoctoral students. He was elected academician of Chinese Academy of Engineering in 1997, awarded the Denis Browne Gold Medal by the Royal British Council, the highest award in the world for pediatric surgeons, in 2000, and granted the Gandhi Gold Medal for pediatric surgery of India in 2002.

He gathers Chinese peers to bring in advanced technologies from abroad and adapt them to the realities of China, promote these technologies nationwide so as to help professional or non-professional pediatric surgeons across the country to improve their skills. For this, he has been lauded both at home and abroad. In the early days of pediatric surgery in China, the country was isolated from the West and intubation tubes, which were a must for general anesthesia, were in very short supply, so he created the method of basal plus local anesthesia and made it possible for surgeries to be performed on children across the country. Today, epidural anesthesia has become a widely accepted pathway in the world. In the 1950s and 1960s, pediatric surgery in China focused mostly on various acute diseases, and Zhang created many simple treatment methods and conducted in-depth theoretical research on infant infections and acute abdominal diseases. With his effort, the fatality of subcutaneous gangrene of newborn was lowered from 100% to only 10% within one year and then the disease was gradually reduced to a rare disease. At Beijing Children's Hospital, Zhang created the records of treating 15,000 cases of pediatric appendicitis in 30 years without a single death, and 100 consecutive cases of acute strangulated intestinal obstruction, including those with necrosis and shock, without a single death. His spasm theory for indigitation and other practical experience are still of practical use even today. Since the 1980s, he simplified and improved the procedures for treating abdominal malformations. The Zhang's film (for imperforate anus), Zhang's forceps (for megacolon), Zhang's valve (for common bile duct) and the one-stage radical operation for anorectal malformations conducted with these devices have all attracted attention from around the world. He also created pediatric surgical techniques for traditional Chinese medicine to treat anal fistula and bone fracture, showing the Chinese characteristics in pediatric surgery to the world.